Apple Flashback 2002: The Paradox of The Steve

Apple Stores and Employees Under Fire

John Manzione, publisher of “a webzine that professes to ‘Celebrate The Mac!'” writes some OP ED about his less than enchanting experiences with staff at Apple Stores, including comments such as: “Steve Jobs lives in an Ivory Tower and doesn’t hear his customer’s frustrations.” Duh.

This is the paradox of THE STEVE. To keep Apple (in the current non-specific meaningless politic-speak vernacular) ‘moving forward’, Steve can’t look back at the slow Macs that won’t run Oh Ess Ten, or the hundreds and thousands of dollars of peripherals we own that don’t work with TEN, or the frustrations of the HUGE BASE of existing Mac users, at the cool OS 9 stuff that is missing from EX, or some of the really stupid ways that EX bumbles around its interface.

Steve can’t look back. He has to look forward. It’s his job to get us excited about the UNIQUE design of the new iMac, at the freedom and ease of wireless networking, and at the awesome capability of FREE software such as iTunes, iMovie, iPhoto, and iDVD. His is a forward-looking perspective reflecting the words of OUR PRESIDENT (Bush II), ‘I think we agree, the past is over.’ 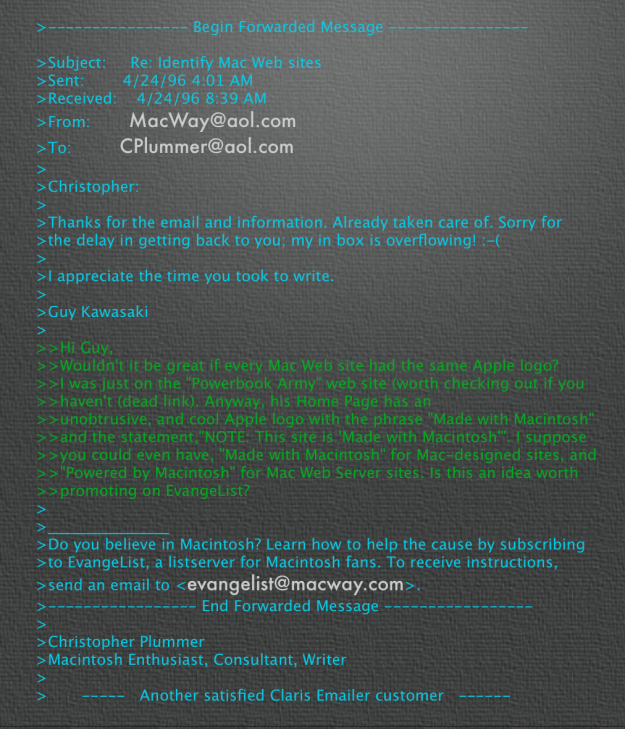 Once upon a time, a long, long, time ago, Apple was a renegade. Corporate IT departments hated Apple because Macintoshes were different. Steve Jobs had been ousted from his own company, and Apple was floundering under a slow parade of unimaginative leadership. The media, smelling blood as Apple stumbled, piled on like a swarming mass of leeches on a fallen water buffalo, never mentioning Apple without also using the word, “beleaguered”.

“Evangelist” Guy Kawasaki, using a new and powerful marketing weapon called “the Internet”, and assisted by a ragtag band of Mac enthusiasts known as “EvangeListas”,  promoted the Mac and kept the spark of life in Apple until the eventual return of “the Steve” and the introduction of Apple’s premier “Think Different” product—the first iMac. Those of you who have only been using Macs for the last ten years or so may find this hard to believe, because Apple is such a successful consumer electronics company and its products are so awesome, but it nearly died, and that’s the truth.

I was an Evangelista, and now and then one of my ideas appeared on Guy’s Evangelist. We fought the good fight!

“Once again, irresponsible Apple Computer has failed to conform to analysts expectations. Apple, the only innovative company in the computer business and the major innovator in consumer electronics, maker of the wildly popular iPod series, recently announced record profits, high margins, and the sale of over 6 million iPods and 1 million Macintoshes in the last quarter. A day later, as the price of Apple stock fell on this disappointing news, Steve Jobs announced the ‘new’ iPod—a thinner, color screen version capable of playing movies. Also announced, a new version of iTunes, which will include the downloading of video media from the iTunes Music Store, and an update to the iMac, adding to its ample capabilities a built-in iSight camera for video chatting, a ‘remote’ so that the beautiful flat-panel can be easily used to display DVDs as well as other rich media, and all for the same price as the previous model. The oracles of Wall Street, shocked at this disastrous development, proclaimed that Apple has now set itself up for a new decline, since it couldn’t possibly continue this ‘pace of innovation’. Apple stock tumbled again, by five points or so, dragging with it the entire stock market. [At this writing, Apple stock is at $74 and climbing on news of more TV content on the iTMS. OH if only I had bought a few hundred shares when it tumbled down to $45!!—Chris]”

Make TechWite Write!!
☕️  SUPPORT TechWite! Want to keep reading iconoclastic, curmudgeonly, and occasionally useful insights into technology and the Internet? Use this link to easily make a donation of any amount, which encourages TechWite to continue writing this blog. Use a credit card! No PayPal account necessary! TIA – Thanks in Advance!!

“A Quail in the Family” by William J. Plummer is now available on Kindle!!